Some of the links below lead to a site belonging to an entity not subject to the Official Languages Act. Information on this site is available in the language of the site.

A Word from the Dean

What does a "professor" do? In an effort to raise awareness of academic practice, we introduce the activities of faculty researchers to the larger college community. We reproduce, with her permission, a diagram of the teaching, research, and service tasks most often associated with work in institutions of higher education designed by Susan Wardell of the University of Otago in New Zealand. Note that “Lecturer” means a regular full-time instructor in New Zealand’s universities.

After applying to have RMC Saint‑Jean recognized as a grant managing institution of the Fonds de recherche du Québec (FRQ), the team from the Office of the Dean of Research, assisted by the college’s main pillars of finance (comptroller), met with the FRQ’s representatives on February 15. The meeting was part of the FRQ’s preliminary assessment of our application. RMC Saint‑Jean must now show that it can meet the FRQ’s eligibility criteria. Some are administrative and legal in nature and concern both the management and governance of research, respect for best practices in ethics and the protection of academic freedom.

Gawiyou Danialou and his colleagues from Concordia University and UQAM have been awarded a team research grant of $300,000 over three years for “AirBands – Wireless Blood Flow Restriction (BFR) cuffs and TeleHab – online exercise prescription and monitoring app” by the Canadian Space Agency.

A review of the research advisory committee is currently being conducted to integrate it into the Academic Wing’s decision-making bodies. Various consultations and discussions have taken place, and we hope to announce some news soon. 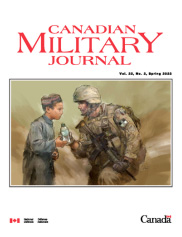 Bruno Charbonneau and Chantal Lavallée have joined the new editorial team of the Canadian Military Journal as deputy editors. The Journal is the “flagship publication of the Department of National Defence and the Canadian Armed Forces, fostering intellectual debate on defence and security issues.”

REVIEW OF OUR RESEARCH COMMUNITY’S ACTIVITIES

Ian Parenteau delivered a lecture on “Populism, Social Media and the Covid‐19 Pandemic” to military personnel of the Training and Doctrine Command (TRADOC), Pristina, Kosovo, in November 2021.

Ian Parenteau stayed on in Pristina to deliver a paper on “Voter Turnout, Convenience Voting and Power of Elected Officials” to the Center for University Studies, Kosovo Security Force.

Charles-Philippe Courtois published the chapter “The aftermath of the Great War and the birth of modern Quebec nationalism” in the edited collection The British Empire and the 1918‑1920 moment.

Simon Hogue and Chantal Lavallée organized a popular lecture by Pierre Prévot on “IA et données massives : un premier tour d'horizon” as part of the activities of the Governance of Emerging Technologies research group from the Centre for Security and Crisis Governance (CRITIC) at the Royal Military College Saint-Jean, February 22, 2022.

Ian Parenteau delivered a paper on “Disinformation, Political Polarization & the Role of Social Media Algorithms” at the National Defence Academy of Latvia in Riga, Latvia, in March 2022.

Marina Sharpa with Carla Ferstman published the article “Iran’s Arbitrary Detention of Foreign and Dual Nationals as Hostage-taking and Crimes Against Humanity” in the Journal of International Criminal Justice.

Bruno Charbonneau participated in the workshop “L’appui à la sécurité et au renforcement des capacités en Afrique,” co-organized by the Network for Strategic Analysis. In addition to chairing a panel, he was a member of the panel on “Renforcer les capacités dans un cadre multidimensionnel.”

Bruno Charbonneau published the article “Should Canada be worried about Russian mercenaries in Mali?” in Policy Options magazine.

Special shout-outs to our colleagues for their numerous and varied professional activities: Ian Parenteau’s participation as a member of the scientific board of the International Symposium of Military Academies and the Fonds de recherche du Québec – Société et culture (FRQSC); Marc Imbeault’s weekly presence on the airwaves of Montréal’s ethnic French-language radio station (CPAM 1410); Élisabeth Vallet’s column in the pages of Le Devoir; Mulry Mondélice’s role as an external evaluator on the doctoral thesis defence jury; and last but not least, the hyperactivity of Yann Breault, who has been on Radio-Canada television.