The training was composed of two distinct training sessions conducted within one overall workshop organized by DMTC. The Child Soldiers Initiative conducted the first portion of the training on 26 and 27 July. Three professors from Royal Military College Saint-Jean, Dr. Marc Imbeault, Dean of Studies and Research, Dr. Danic Parenteau, Associate Professor of Philosophy and Political Science, and Mr. Robert Lummack, Instructor at the Osside Institute, conducted the second portion of the workshop from 28 July to 5 August. Friday 28 July was devoted to a group activity which consisted of a visit to the remarkable site of Petra, while Saturday 29 July was a day of rest. On 6 August, a symposium on ethics and integrity was held at the Royal Military Academy of Jordan.

*This report will only summarize the academic nature of the workshop on ethics and integrity, from the perspective of the three professors from RMC Saint-Jean.

Having a diverse group allowed for a wide variety of opinions and experiences to be shared within the group. There were also some challenges resulting from this diversity that were overcome – this will be discussed later on.

The Format of the Workshop:

A mix of pedagogical activities were employed during the workshop. This allowed different learning styles to be engaged. Owing to the nature of the candidates, anagogical principles were employed in the design and implementation of the training. Further, deliberate choice of participative and reflective activities ensured that there was space for candidates to engage with each other and with the academic material. Generally, mornings were devoted to academic lectures and in the afternoons, time was allocated to the viewing of films, independent reading and group discussion.

The first five days of the training included magisterial lectures in plenary session in the mornings, for approximately three hours. All professors conducted lectures. Their complimentary styles allowed for a dynamic examination of the topics from both theoretical and practical perspectives.

Days 5 and 6 included the analysis of case studies demonstrating contemporary military ethical dilemmas. These discussions were very interesting for the candidates as they were able to exchange with their peers on very challenging real-world situations and were able to employ the theoretical elements from the workshop to ground their remarks.

Films included: The Battle of Algiers; The Gatekeepers; Paths of Glory; My-Lai, Casualties of War. The films allowed for common ground upon which to discuss the ethical elements that were discussed in the workshop. Further, it permitted teaching points to be illustrated visually and for students to learn from an alternative medium.

Candidates were issued a USB key with all academic presentations and workshop readings. For candidates who did not have or did not bring their laptops or other devices, paper copies were made available as were a number of hardcopy books. This time allowed for reflection and for individuals to pursue their personal interests with regard to the subjects. Additionally, candidates were encouraged to find their own texts. During this time, small group discussion or discussion with the professors was encouraged and proved very fruitful.

An open book exam, sensitive to the linguistic abilities of the candidates was conducted on the final day of the training to confirm candidate understanding of academic material and key messages. They achieved a 100‰ success rate with five of the candidates attaining grades higher than 90‰.

Overall, the workshop was very successful and was greatly appreciated by the candidates based upon many direct feedback encounters and a quantitative course critique. It is also the direct observation of the teaching team that the workshop was very successful. One observation was that the motivation of the group was very high, particularly from the African candidates. Also, there was a low amount of absenteeism and there was a high interest in academic materials the team had. These materials were eventually given to certain candidates at random.

Certain linguistic challenges were initially problematic. Often, English was a second or third language for the candidates and proficiency levels were diverse. Particular attention was paid to volume; the use of microphones was used at times to ensure the entire group was able to hear comfortably. Secondly, professors paid attention to use language that could be universally understood, such as avoiding culturally exclusive expressions or terminology. The style of the presentations was also flexible enough to allow for questions and clarifications on the spot. Spontaneous discussion occurred, whereby allowing candidates to express themselves without limitation.

It is also suspected that perceived linguistic weakness, may have led some candidates to not want to speak publically. There could also be elements related to respect for higher ranks leading to lower ranks desiring to stay silent and leave space for higher ranks to receive recognition. These suspected issues were overcome by allowing space in the workshop for candidates to approach the teaching team directly and gently encouraging less vocal participants while respecting candidate preferences. This often proved successful in bringing out important points for the group to consider.

Sensitivity to culture was also valued by the Academic team. Having groups from three distinct civilizational philosophies meant that there was learning and adaptation that occurred on all sides. Most importantly, differences of values or thinking were handled with respect, diplomacy and tact. This respect was key to ensuring group cohesion.

Initially the group was naturally divided with the Jordanians tending to sit and socialize together and certain African candidates in the same way. As, the workshop progressed, there was increased participation between Jordanian and non-Jordanian candidates. This was an amazing phenomenon to witness as the group united in their bond of the Profession of Arms, and demonstrated increasing respect as formal and informal opportunities for dialogue occurred. It is also certain that the group visit to Petra had a positive bonding impact upon the group, allowing candidates to get to know each other in informal ways. Jordanians shared with non-Jordanians about the history of their country and the significance of this historical site.

Time during the workshop was included to accommodate prayer for religious reasons. Additionally, the Jordanians as the host country were extended the opportunity to share more about their country, their Profession of Arms and the Jordanian ethical and moral worldview. This was appreciated and was a benefit to the whole group.

Following the conclusion of the workshop on 6 August, the academic team conducted a morning symposium at the Royal Military Academy of Jordan located near Amman. Over 270 officer cadets were briefed about the Canadian Officer training system, including the role that the Royal Military College Saint-Jean plays, the development of the Canadian Military Ethics system and the importance of NCM education. Dr. Imbeault provided a keynote address upon different leadership styles and their uses. Meetings with the commandant of the training center followed. This day, separate from the primary workshop, was devoted to creating a link between Canada and Jordan, specifically between Military training establishments. It also explained actual military training opportunities for Jordanians in Canada. Most importantly, it served to positively influence young officers, just starting out in their careers about the importance of leadership and ethics.

The nature of the workshop is critically important for military personnel owing to the complexity of the real world issues they are and will be called to participate and engage in. Sharing Canada’s experience in a non-prescriptive and non-threatening manner and providing academic knowledge encouraged candidates to engage in ethical reflection within their own spheres of influence within their respective institutions and countries. It also allowed for officers from various countries to learn from each other and have potential personal points of contact for possible collaboration in the future. For Canada, this training also provided additional cultural intelligence and set the groundwork for future relationships to develop. 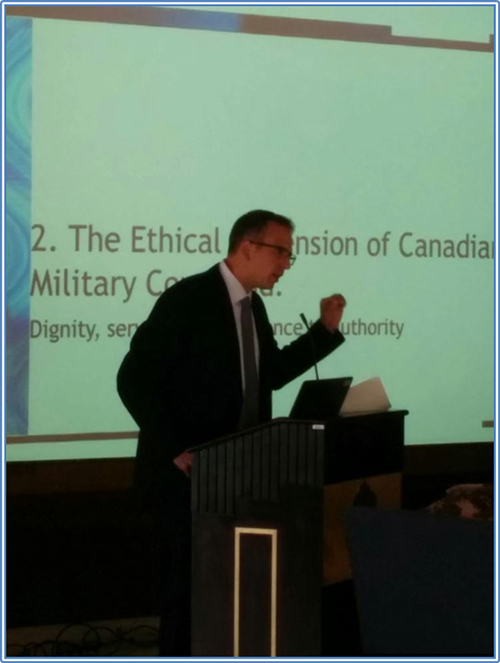 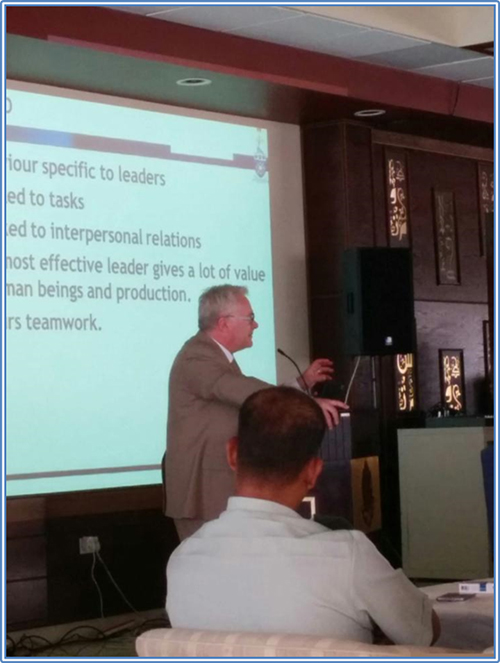 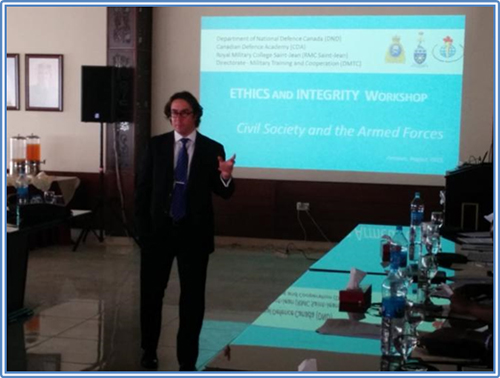 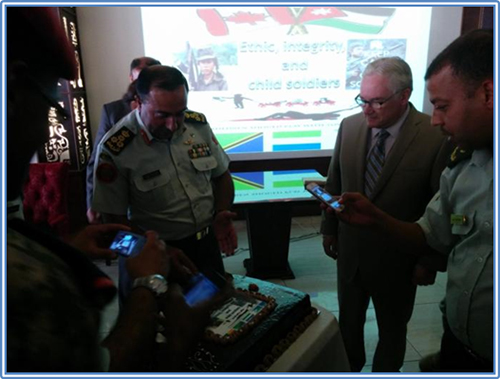 Dr. Imbeault and Jordanian military leadership receiving a special cake being presented during the closing ceremonies. 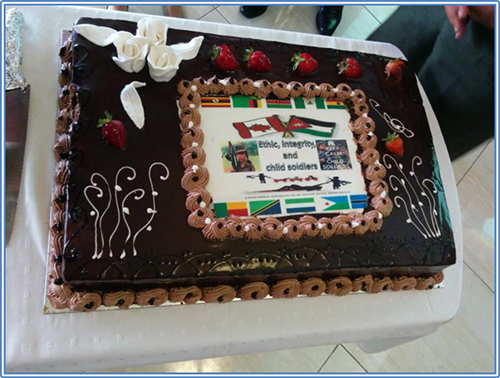 The cake included flags of all countries represented during the workshop, a unifying symbol of respect, accurately depicting the experience of the group. 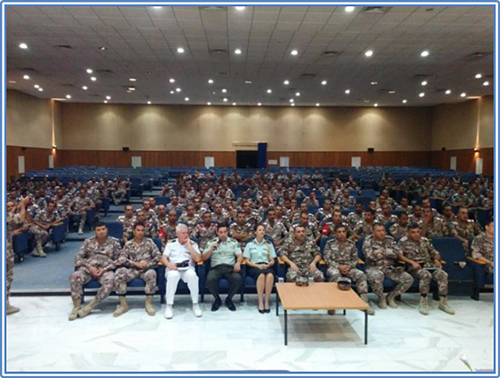 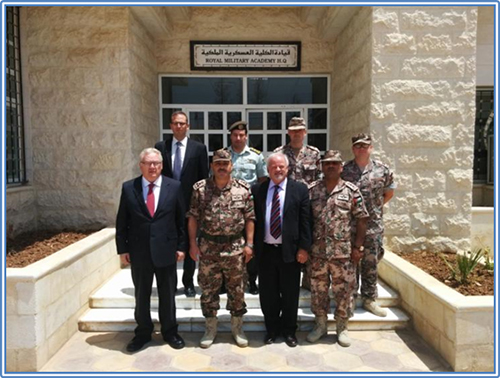