Prior to the "Ethical Dilemmas in Peacekeeping Operations" Symposium, Col Boilard, Canadian Defence Attaché in Brazil, Mr. Jean Néron from the Directorate – Military Training and Cooperation (DMTC), and Colonel Boechat, from the Brazilian Ministry of Defence (MoD), and Dr. Marc Imbeault, Dean of Research and Studies at the Royal Military College Saint-Jean, visited three Brazilian Military Academies in a short time. The aim of the visits was to discuss the possibility of organizing, three one-day Canadian-Brazilian symposiums on military ethics at these military academies.

On Tuesday 18 August, they visited the Air Force Academy in Pirassununga. Further, they visited the Army Academy (Agulhas Negras) in Resende on Wednesday 19 August, and finally, the Escola Naval in Rio de Janeiroon Thursday 20 August.

At the Air Force Academy and the Escola Naval, Dr. Imbeault described the program while MoD Col Boechat and Col Boilard teamed up to describe the bi-lateral approach to be used in forming the teaching team. Brig do Ar Valadares, Comd Air Force Academy, was very enthusiastic at having an international (Brazil-Canada) team that could engage with his school on the subject of ethical dilemmas in peacekeeping. A similar reception was received at the Escola Naval, although Admiral Campos was initially concerned that time constraints due to the Rio Olympics might interfere. The visit to Agulhas Negras was also successful. General Noveas rapidly opened up to the proposition althought it involved a foreign doctrine, as his professors would form part of the teaching teams. At all locales, Mr. Neron had to temper enthusiasm by explaining that this visit was a fact finding mission so that DMTC could submit a plan for approval. Final approval and the execution of the plan would probably come in the Fall of 2015.

It must be stated that academic symposiums of this nature have never been attempted in Brazil. The bottom line is that the visits were successful; all of the Brazilian military academies that were visited accepted the DMTC proposal.

Brig Ar Valadares agreed to provide support ordering his Curriculum Planning Officer to make two days available for the activity so that half of his group could attend each day. Similarly, Gen Noveas is also setting two days aside for DMTC to engage with his fourth year cadets; he is hoping this could become a yearly activity, whereas Admiral Campos is reserving an afternoon schedule because of the lower number of students.

All told, about 1750 students and 60 staff are expected to be engaged in this activity.

The "Ethical Dilemmas in Peacekeeping Operations" Symposium was an event co-hosted by Canada and Brazil which was held from Monday 24 August to Saturday 30 August. In total, 46 military candidates participated in the training. Roughly, half the group was Brazilian with 26 Brazilian candidates. Additionally, 20 candidates from regional countries participatedNote de bas de page 1.

The teaching team was composed of Department of National Defence Professors from Royal Military College Saint-Jean, Dr. Marc Imbeault, Dean of Research and Studies, and Mr. Robert Lummack and Mr. Francis Clermont from this College’s Chief Warrant Officer Osside Profession of Arms Institute. The strategic initiative, DMTC oversight and over-arching leadership of the Canadian contribution, came from DMTC representative Mr. Jean Néron. Furthermore, there was a strong collaboration between the Defence Attaché Col. Boilard and his team.

This report will summarize the Symposium exclusively and uniquely from the perspective of the RMC Saint-Jean participation. Overall, the symposium proved to be a successful training which achieved several important outcomes.

The general overarching objectives of the workshop were:

Different from the previous trainings offered by DMTC to which RMC Saint-Jean participated was the fact that Canada and Brazil were co-hosts. Aside from the strategic optics of this format, space was made to allow a significant Brazilian contribution into the academic programme of the symposium.

Lectures were given by a Brazillian professor, Professor Antonio Ramalho, and by members of the Brazilian Peace Operations Training Center. Professor Antonio Ramalho’s expertise in subjects related to contemporary developments in the United Nations System and related ethical dilemmas was informative, challenging and appreciated by the totality of the group.

The Brazilian Peace Operations Training Center, the “Centro Sergio Vieira de Mello”, presented on two separate days and included formal briefs and case study activities resembling historical experiences of the Brazilian military in peacekeeping missions. Brazilian military experiences from the participation in MONUSCO in the Democratic Republic of Congo and in MINUSTAH in Haiti were discussed. Much practical wisdom was provided as the complexities and challenges that the aforementioned PSOs as well as similar operations represent. Issues covered were the legitimate, lawful and mission-productive engagement in the local civilian populations, and risk-assessment and operational decision-making.

The nature of the main thrust of RMC Saint-Jean’s contribution was philosophical. It discussed three moral philosophical traditions that form the foundations of contemporary ethical reasoning. In taking time to learn about these traditions, their origins, contexts and influence, the individual participants were equipped with knowledge to inform and assist future ethical decision making. There were many “aha” moments from the candidates who were connecting the dots between their real-life experience and the theoretical elements. Additionally, contemporary challenges faced by the military in our complex security environment were discussed, and their connection to ethics was highlighted. Another significant topic that was discussed from a moral lens was the legitimate use of force. The personal styles of the professors were, of course, different but proved complimentary. Most importantly, all professors approached their teaching with humility, respect and professionalism.

Also included were case studies from the CAF Ethical Decision Making Programme which gave space for the application of the academic knowledge that was learned using situations similar to what the CAF has actually faced.

Overall, the symposium was very well supported by the Brazilian contingent. There was a large presence of senior officers, such as Admiral Barbosa, who attended the entire symposium, and several Colonels who ensured the successful unfolding of the event across various themes, such as logistics, and Col. Boechat provided a lecture.

Generally, formal academic presentations in the form of lectures occurred in the mornings and early afternoons. Late afternoons were reserved for different types of learning activities, to avoid fatigue and mental burnout amongst the candidates. Time was given to allow for personal reading, reflection, discussion and the viewing of films.

Films shown were: The Gatekeepers; Paths of Glory; My-Lai; Casualties of War. Each film viewing was followed by a learning activity that enabled to link film content to the academic material presented in the course. This allowed candidates to think independently and share in discussions following the film. What was excellent was that each person gained a different aspect of learning; group discussion meant that the collective benefitted above what an individual could accomplish alone. Throughout the course – during breaks, meals, evenings, formal plenary discussions, small group discussions, the group outing and in the corridors, the atmosphere fostered the sharing of stories, experiences and knowledge. One particularly vivid example came from Admiral Barbosa who shared a real-life experience of Brazilian troops in Haiti, which demonstrated an amazing example of a young officer thinking for himself, using restraint and dealing with a challenging security situation creatively thus preserving life, the Brazilian military relationship within the community and Mission Success.

Logistically, being housed at the Airforce Hotel in Salvador allowed for a successful event. On-site lodging and full-suite restauration services allowed all participants to be very comfortable. A major advantage of housing where the symposium occurred was the elimination of the logistical burden to transport teachers and participants to and from locations. As well, the IT capacity of the hotel was excellent and all required assistance was provided. Further, the hotel was situated in a convenient area of Salvador, within walking proximity of safe areas for recreation and entertainment during non-course hours.

A cultural visit Wednesday Afternoon served as an excellent time for the group to bond together and learn about the history and culture of Salvador specifically and Brazil generally. Brazilians were keen to share about their country, and the visit was of interest to Brazilians who were predominantly not from Salvador.

Relations between Spanish speaking participants and Portuguese speaking Brazilians was very good. It was observed that significant communication could occur owing to linguistic similarities, cultural proximity and a common understanding of military culture and the profession of arms generally. In short, group dynamics were positive and did not hinder the experience in any way. In fact, the aspect of uniting representatives from across the Hemisphere was very positive.

A multiple choice final exam was administered to confirm the transmission of knowledge. Short-answer questions were not used as the requirement to write in English was realistically potentially problematic for candidates with a lower English written proficiency. Most questions were relatively straightforward and intentionally void of confusing language to assist the clientele where English was not their first language. The results of the exam were very positive with an 80 percent average. 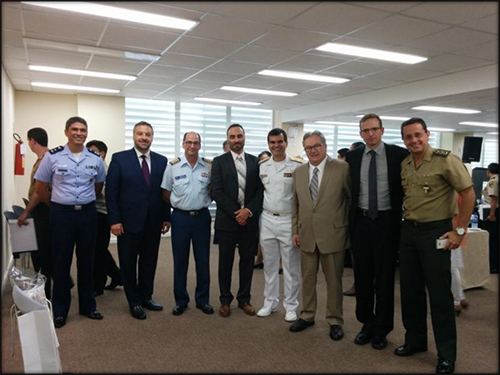 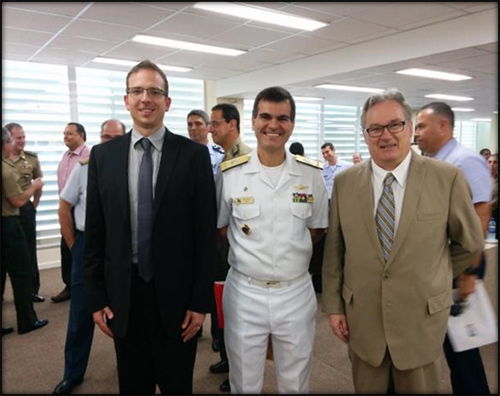 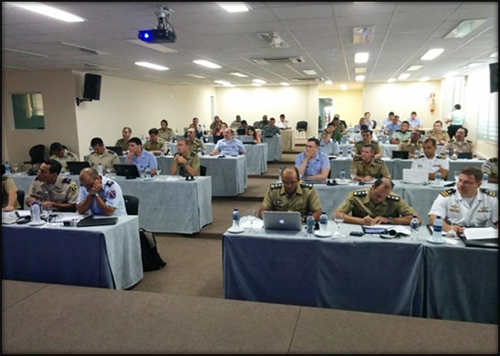 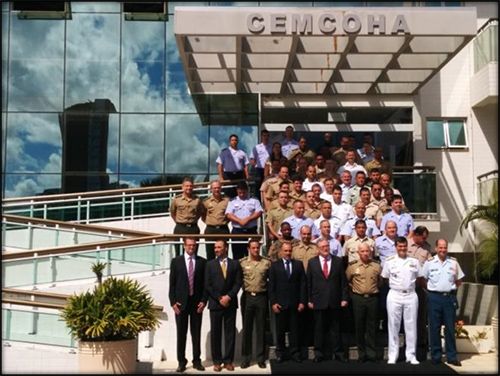 The group picture with Major-General Schons (in front, M. Imbeault to his right and Rear Admiral Segovia to his left). 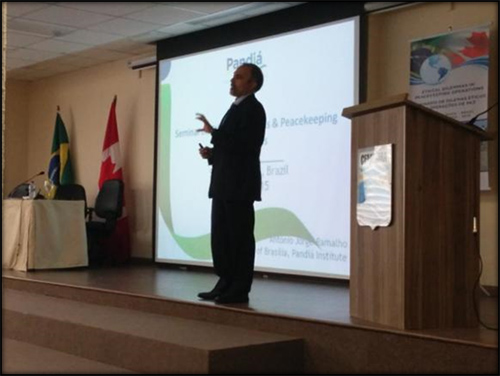 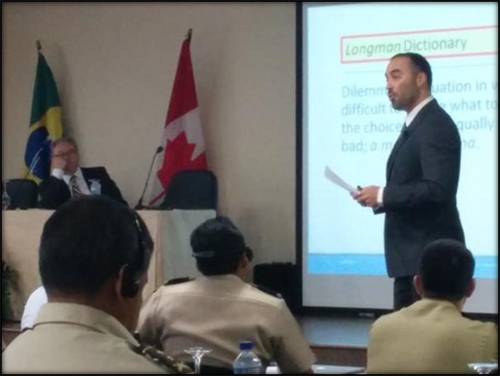 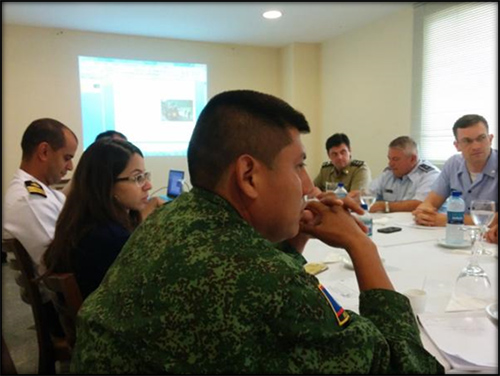 Candidates in a small group